Moving Beyond “Clicks Not Code” in Salesforce

Salesforce—although it was originally designed as a CRM—has become an incredibly popular development platform.

Ease of use is a major advantage for Salesforce’s development capabilities. It’s been a focus for the platform from the very beginning. This is accomplished by taking a “Clicks, Not Code” approach to development.

Salesforce offers a series of built-in tools to help users create and launch their own updates and applications without writing a single line of code.

This functionality opens the world of development to more people. It becomes more accessible. And for companies, this can translate to time and money saved.

Salesforce provides several tools to assist in creation, such as: These tools can help accomplish various tasks such as turning worksheets into applications, creating automation, creating processes, and more. A lot can be accomplished by utilizing Salesforce’s built-in development tools.

But what do you do if this isn’t enough?

Users still have the option to create and introduce custom lines of code in Salesforce.

What are the advantages of doing this? Are there any downsides? How do you know if custom coding is beneficial to your project?

Let’s look a little deeper into the process and implications of moving beyond “Clicks, Not Code” in Salesforce.

The general idea behind “Clicks, Not Code” is that it makes the app building process much easier. So why would someone choose to make things harder on themself? Traditional coding practices offer a wider range of capabilities to the developer—which is inherent due to the fact that those using the pre-built tools can only accomplish as much as the tools allow.

Here are a few advantages developers will see by intruding custom code to their development projects.

Every business is different. Their services and functionality require specific tools to serve their customers properly and efficiently.

This needs to be reflected in their technological platform—whether it’s an application, website, or anything else. And this can’t always be properly accomplished with pre-built Salesforce development tools.

Custom lines of code are the only way to get a truly customized interface that best serves your customers and clients.

It’s occasionally necessary to process large amounts of data, and these processes can become quite complex.

The best way to address this is to perform the functions in bulk by loading it together in mass quantities and addressing it with a singular function. Custom code can be introduced to address the necessary specifics to adequately process the data.

There are some complex functions that simply aren’t possible with “Clicks, Not Code.”

One example is Just-in-Time (JIT) provisioning—”a method of automating user account creation for web applications.” Some Salesforce clients use this functionality to provision a user’s access the moment they attempt to access a company’s Salesforce instance.

Complex functionality that best serves a company’s exact needs is often only possible through custom code. 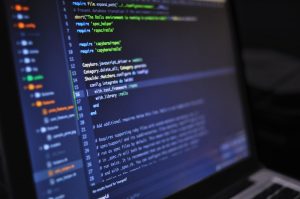 Standard lines of code can sometimes be much easier for a development team to interpret and maintain when updates or fixes are needed.

It gives developers the ability to separate logic, comment on existing code, package features in the code repository, and eventually deploy the updates.

Attempting to do the same process through clicks can be more labor-intensive, and is occasionally not even possible.

An experienced developer can often produce functionality through traditional coding practices quicker than when trying to use pre-built Salesforce tools.

This is accomplished only when they have ample experience. They can avoid an extra step of essentially “translating” the coding language they might normally use into the available Salesforce tools.

The upsides of custom coding are also going to come with some potential drawbacks.

“Clicks, Not Code” became popular for a reason—the challenge is to weigh these factors against each other to figure out which path forward makes the most sense to address your Salesforce development needs.

Knowledgeable Developers Are a Must

“Clicks, Not Code” is meant to open the world of developing applications and updates to everybody. Utilizing custom code means your development team will need to consist of…developers.

Those that don’t foresee a frequent stream of updates or rollouts might not see the benefit of keeping full-time developers on staff.

Small Oversights Can Have Large Results

Mistakes happen. Overwrites occur. And bad lines of code can have negative effects on live systems. Custom code is made up of numerous functions with very specific layouts and functions.

A simple mistake can render the entire line of code meaningless—or worse, make it perform an unintentional function. Pre-built tools will be much more straightforward, making small mistakes less drastic.

Deployment of updates and applications is when you see if your efforts sink or swim. Custom lines of code, as we discussed, have a higher likelihood of problems when compared with pre-built Salesforce “Clicks, Not Code” tools.

This could cause issues post-deployment which will need to be rectified. Improper quality checks throughout the development process will make it much harder to locate the error and fix it.

Deciding What’s Best for Your Project “Clicks, Not Code” works for a large amount of Salesforce users. It’s been around for over a decade and wouldn’t have made it this long if it didn’t have a series of very useful and advantageous features.

However, this solution will not fit every scenario.

Companies that have reached the limits of what “Clicks, Not Code” has to offer will need to explore the potential of traditional coding.

Not sure if you’re ready to make that leap? Here are a few factors you should keep in mind when making the decision to move beyond “Clicks, Not Code.”

How often do you plan to release new updates, applications, and software?

Frequent releases can benefit from the services of an experienced and knowledgeable developer. Custom code for smaller updates can actually be quicker than a less-experienced team member working through pre-built Salesforce tools.

Does your platform require a lot of unique capabilities?

If so, custom code will be the best way forward. Pre-built tools are a great way to introduce new functions to your platform, but they aren’t quite as effective in introducing new functions to the industry as a whole.

Does your platform require the use of complex functionality?